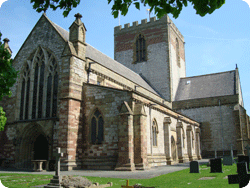 Slate is exceptionally durable, unaffected by normal extremes of temperature and is highly resistant to acids, alkalis and other chemicals. Slate roofing retains natural colour, even in UV light and is impermeable to water. Welsh roofing slates are commonly taken off roofs after 100 years (after the timbers have failed) and re-used. Penrhyn slate, for example, was removed from St Asaph Cathedral after 400 years of use and reused.

View examples of our slate work, or give us a call to schedule a free slate roofing estimate.

True slate shingles are derived from hard, impervious metamorphic rock that can be split into thin layers. Distinct from limestone and sandstone slates, they are associated particularly with Scotland, Wales, Cornwall and Cumbria.

Slates and slating techniques vary. Most true slate roof shingles are uneven, irregularly sized and laid in courses that diminish towards the ridge. The main exception is Welsh slates from the 19th century onwards, which are smooth and used in regular sizes that give uniform courses. Their usage spread widely with the advent of railways. 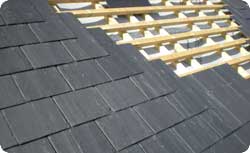 Slate roof tiles are laid on the battens in a 'brick bond' pattern, i.e. with the joints between them aligned with the centre of the slates above and below, and with about 3mm between the sides.

This layout gives a double lap covering, (i.e. the top part of each slate is covered by two slates, the centre of the slate of the next row and the lower part of the slate above that). The overlap will depend upon the slope of the roof - the steeper the slope, the smaller the overlap required.

The top row of slates at the ridge is also made up of half slates to give the next row down a double lap. The top edge of the second row down must be at a level where it will be covered by the ridge tile.

Aluminum nails should be used in preference to galvanized nails as aluminum will not corrode whereas the galvanize coating will tend to. Alternatively copper or stainless steel nails can be used.

Slates can be either nailed at the centre line or near the top. When slates are nailed at the top, the nails are covered by two slates and so are less exposed, but, being secured at only one end, they are at risk of being lifted by the wind and are more likely to be broken. Nailing slates at the centre line reduces the protection to the nails but reduces the risk of them being lifted by the wind. Generally, it is better to nail them at their centre line using non-corroding nails.

When it comes to roofing contractors – the guys are the best. We were referred to them by our neighbors, who hired the company to do very delicate slate tile work. From the start the company gave a fair estimate with all the options laid out. The work itself was done in a timely manner. The company really works with you to get the job done.

We've used Pro Roofing on two homes and are very satisfied with the work. They are courteous, quick, and clean up nicely after themselves. The staff goes out of their way to answer all your questions and prepare you for what to expect, and I think they left my yard looking nicer than it was when they started.